Accepting a friend request from someone she did not know has led Kent State junior Allyssa Griffiths to be cyber stalked for over four years… and there’s nothing law enforcement can do about it.

It all began with a text…

The summer before moving out of Medina, Ohio and moving to Kent State, Allyssa Griffiths received a text message from a number that was not in her phone. It was a picture of a nude male. She laughed the picture off, figuring it was a joke, but as the night went on things escalated with the anonymous texter.

While Griffith’s had previously ignored the photo she had received, she felt as though she could not ignore these messages. She responded to the anonymous sender, demanding they stop contacting her and threatening to take police action. She received a brief apology, saved the number in her phone as ‘Creep’, and did not hear from them for the rest of the summer.

A case of stolen identity

Upon doing some research, Griffiths’ realized she had a cyber stalker. A Facebook page with the name ‘Lauren Ashley Cook’ displayed all of Griffiths’ information, just with a different name. The whole website was a duplicate of her own personal Facebook.

Griffiths had then discovered that she was now part of the statistic that 1.5% of people 18 or older were victims of stalking.

Lauren Ashley Cook didn’t just run a Facebook and Twitter- she was running 10 to 15 websites using Griffiths’ photographs. Pictures of Griffiths’ and her friends were used on blogging websites, dating websites, and other social media outlets.

Upon taking this information to the police, they told Griffiths that no action could be taken since none of the content was threatening towards Griffiths.

The content of Cook’s websites was often depressing and spoke of death and suicide or explicit content such as pornography and sexual acts. She maintained a decent number of followers on all of her websites and actual people commented back to her posts.

A frequent commenter was a man named Mike.

Griffiths’ noted all of Mike’s interactions with Lauren and realized that their relationship was much more than just a friendship. Griffiths’ reached out to Mike, explained and proved who she was, and discovered that Mike had been dating ‘Lauren’ for over a year. The two had exchanged the words ‘I love you’ and planned to meet up.

Mike may have been Griffiths’ biggest assistant throughout her journey with Cook. He gave Griffiths’ the phone number that he texted Lauren off of and when Griffiths’ put the number in her phone she had a huge revelation.

The number popped up under the name ‘Creep’.

Lauren Ashley Cook was the one texting Griffiths’ the summer after she graduated, but she had found Griffiths’ way before that.

The oldest websites found dated back to 2006/2007, meaning Griffiths’ had been watched since she was 14-years-old on MySpace.

After contacting the number herself Griffiths’ told her stalker that she knew what she had been doing and demanded that the websites be taken down. Cook complied and deleted the websites- just to create new ones.

This cycle continued every time Griffiths’ confronted the stalker and to this day Griffiths’ knows that there are still websites on the Internet with her pictures being used inappropriately. She now tries to use social networking as a branding tool and is very cautious of who she allows to see her information on her websites.

When asked why she did it, Cook said she followed Griffiths so closely because she had “the perfect life”.

Some would be shocked to discover that Griffiths’ stalker was a women, but research done by the University of Pennsylvania found that 45 percent of stalkers are female and 56 percent are male.

Griffiths’ has given several presentations regarding her experience with stalking and hopes to spread awareness on how to stay safe on social media. 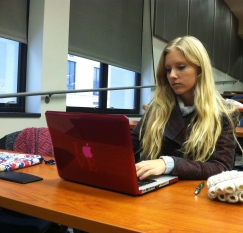 Griffiths, whose cyber stalking escalated when she accepted a friend request from someone whom she did not personally know, said she is not weary of who she accepts on social media.

Griffiths came forward with her story this year and has been covered by student media and local media, such as the Daily Kent Stater and Channel 3 News. This article ran on August 30, 2012.

Griffiths remains active on social media, but now uses it more as a branding tool. Here she updates her page on November 26, 2013.

Griffiths’ stalker, who went by the name of Lauren, ran countless blogs and social media websites. Here is a blog posting she put up, claiming the boy in the picture is Griffiths’ deceased brother, when in reality he is a friend from high school who is still living.